Bot Libre provides a suite of mobile apps for Android and iOS.
Our apps let you create, chat, and train your bots from you phone, as well we provide virtual assistants, social chat apps, and games. 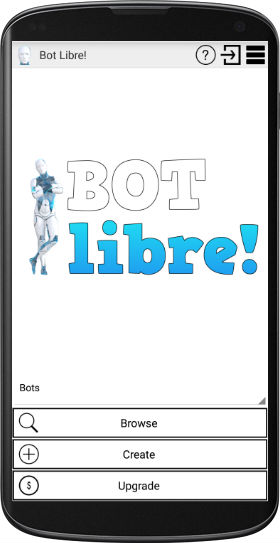 Bot Libre Personal Assistant provides your with your own personal assistant for your phone that can open apps, websites, send texts and email, schedule calendar events, set timers, perform math, lookup definitions, and much more.

Bot Libre 3D lets you chat with your bot in an immersive 3D world.
Customize your bot's 3D avatar and choose the environment you want to chat in.

Create, chat, and train your bot offline, running directly on your phone.

Chat Bot Wars lets you create your own chatbot and battle other bots in conversational warfare.
Gain wins and rank from defeating other bots.

A chat bot trying to become the most intelligent bot on the Internet.

We also provide a suite of social chatbot apps from our sister website Virtual Dream Chat.

You can also use the open source Bot Libre SDK to create your own app.
We can also develop a app for you, contact sales@botlibre.biz